Honored to have poems today in Harpy Hybrid Review (plus some images and an Imayo broadside). There are other links, but for today, here is one, my usual square “album cover.” There’s lots of great writing in this issue (will add links later). These editors were some of the nicest to work with. They even asked for me to send them an image contract, which I sent. I will be writing a post soon about contract writing for creatives.

Okay, I’m totally giving it all away here, but do read the issue because it has interesting work that is not mine including work by Shareen Murayama, a poet I admire very much (plus she did the cover artwork). Also, I do have explanations not replicated here. This piece is an imayo, a Japanese poetry form originally intended to be sung. It has a fixed syllabic structure: 7, 5, 7, 5, 7, 5, 7, and 5. Some imayos were very melancholy and some conveyed spirituality (you can read more about online and maybe even write some). I feel a bit uncomfortable about this piece as I really feel I borrowed it (I’m not Japanese). I know many poets write/steal/borrow forms including popular haiku, and I write a lot of zuihitsu-like pieces, but this one . . . I hope I honored the tradition which I feel informed this poem, and yet, this was written with the purest intentions and that it achieves a kind of stillness. You can read a bit about it on Harpy Hybrid’s page. Read about mahasamadi online (Sanskrit or Hindi) and in the calm of this piece, there’s something potentially socially explosive if read contextually (Max completed suicide . . .). I will write more about this aspect in some essays in the near future.

I like how the words form a path that curves opposite of the photo, creating a slight tension or opposition. Note, Harpy Hybrid is hosting a reading on July 17th. Will add this to my calendar. 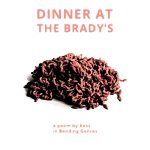 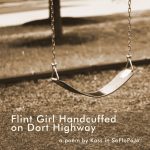 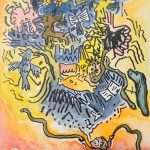 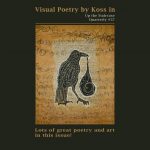 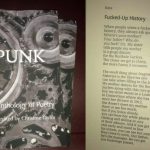 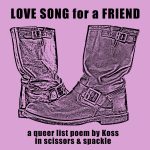